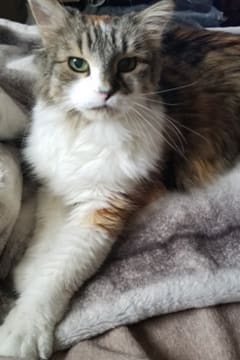 I don't really know when Callie was born or how old Callie was. She was found at the rest stop on I-75 on the way to TN, on a cold, rainy night November 24, 2009, by a very good friend. He called to tell me about seeing a cat, & if he could catch it, would I come & get it. He did & I did. She was a beautiful long haired calico & she wasn't supposed to stay with me, except within a few weeks she needed abdominal surgery. After that she was mine.

Callie had the small ear clip that designated 'capture & spay', but I believe she was a pet at one time. She was nervous but never mean. In time she became the most loving kitty I've ever had. That's saying A LOT because all my kitties have been luv bugs.

When Callie came to me I already had my lovely Freesia, a small flame point Himalayan. The two never got along which was very sad but they never fought either.

When Freesia crossed the Rainbow Bridge, in August 2015, Callie truly blossomed. She loved being the only kitty!

Wherever I was, Callie was. She claimed the place where the keyboard sat as 'hers' on my desk. She would greet me at the door when I came home & run to the chair next to the table where I kept my phone charger knowing that's where I would go to first. Then insist on being held & given scratches. Each night as I turned out the light to go to sleep, Callie would come & lay on top of me, kneading & purring her goodnight. As soon as she heard me in the morning, she'd insist on her morning cuddle time. She was never one to wake me to be fed (she always had food available & was always an all day nibbler), she just wanted love & attention & I showered her with it.

In the last year she weakened. She needed fluids every other day & pills morning & night & special food. I still wasn't prepared for her leaving me. I'm distraught that she's gone. She's my beautiful Callie Kitty and her loss leaves me empty.

Click a candle below to add a candle to your message.