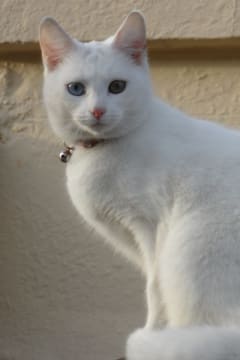 Flavius "Fluffy" IIV died on Wednesday, January 22, 2020, after being diagnosed with bone cancer. He was 17 years old.

We adopted Fluffy the moment we saw him at the shelter. I should say that he adopted us. The only thing in his way was a cage, but that didn't stop him from sticking his little white paw through the bars and gently batting my face.

Fluffy had the magical ability to chase a laser pointer around for an hour and then immediately snuggle up and sleep as soon as you put him on your lap. He was an exceedingly patient cat. For more than 20 years he let children and then grandchildren pet him backwards, pull his tail, or lug him around.

He was a beautiful, friendly pet that never bit or scratched. His purr was audible throughout the whole house, especially at night, and it soothed us all to sleep. The house is too quiet now without him, and his headbutts and his habit of "making biscuits" will be sorely missed. We're glad to know that he's happily chasing mice somewhere, and no longer in pain.