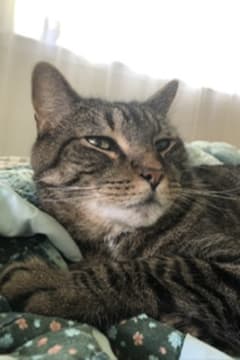 Lizard was adopted by Josh from the Fayette Animal shelter as a kitten in 2004. He was a brave hunter in his younger years and had two cat companions, Penelope and Scirocco. Lizard loved lounging with Josh, accompanying him through many movies, television shows and video games. In 2015, Lizard, Scirocco and Josh moved to a new home with a new human companion, Ashley. Together Josh and Ashley rescued many cats and kittens, Lizard begrudgingly tolerating their comings and going’s. The time came in 2020 to say goodbye to his cat brother, scirocco. But the parting was soon followed by the arrival of a new baby human. Lizard hesitantly became acquainted with the new human, and later would fiercely protect her while she played outside, and run to her aide when she awoke with nightmares. Even at 18 years old, Lizard had pep in his step, still enjoying exploring outdoors occasionally between couch naps in the sun.

Lizard was the greatest example of a loyal animal companion. He shared so much love and joy with us, and so much concern for our baby girl. Thank you for 18 wonderful years, for being in our family and helping us look after our girl. You’re in our hearts always, and we promise to remember to slow down and enjoy a good afternoon nap in the sun.

Click a candle below to add a candle to your message.